A MATTER OF ENERGY

SPACE: somewhere between Silix IV and Carbonia, two mysterious planets located near the core of the Andromeda Galaxy
TIME: unknown

After a 10-year journey, a large spaceship from Earth, the FL Heisenberg 1, approaches an unknown solar system deep within the Andromeda Galaxy. Everything about the system seems unnatural, as if the crew were witnessing some cosmic structure from the beginning of time. Instead of a star, the center of the system holds a massive black hole, surrounded by a number of strange-looking planets. Two of these planets attract the attention of the crew. The first one is deep blue and seems formed by translucent crystals, rocks and liquids. The second one is actually a satellite which orbits an ominous black gas giant. It appears to be made of dark rocks, silver seas and lakes, and shiny translucent masses. A purple glow seems to emanate from several regions of this satellite.

The peace of the space journey is suddenly shattered by a succession of alarms and sirens that resonate throughout the entire ship. The ship then begins to shake and vibrate more and more violently. An analysis quickly shows that hull integrity will collapse within 20 minutes. Seeing that all hope is lost, Dr. Jack Heisenberg, the captain of the ship, goes to his private quarters to record one last log entry into his computer. A cryptic message that will not be heard again for almost 4 billion years… 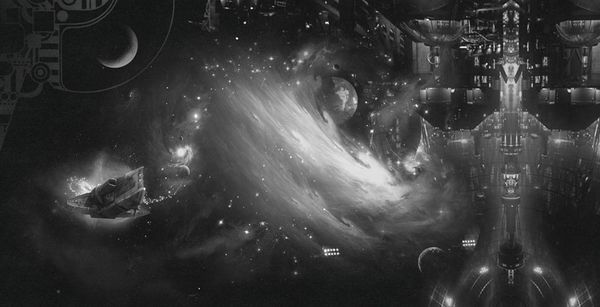 SPACE: from Silix IV to Earth
TIME: the beginning of the Archaean eon (3.8 billion years ago), shortly after the appearance of life on Earth

At the dawn of time, near the core of the Andromeda Galaxy, lurks a mysterious silicon-based techno-organic life form known as the Mystic Technocracy. They are the absolute rulers of a vast and desert region of the Universe known as the Virgo Supercluster. They live on Silix IV, an eerie world illuminated by UV rays, with mountains of crystal and metal, black deserts of silicon sand and seas of liquid mercury. The Technocrats possess special abilities that allow them to manipulate reality at subatomic level, resulting in phenomena that appear to have mystical or supernatural causes.

One of the first sentient races of the Universe, the Technocrats suddenly witness something unexpected: on a multitude of planets, carbon-based molecules are quickly assembling into highly adaptable and self-replicating sequences. The Technocrats are unaware of the concept of evolution, which does not apply to their rigid silicon structure, and they immediately perceive a threat. They decide to exterminate all carbon-based life forms wherever they find them, because they realize that eventually their evolution would result, billions of years in the future, in a proliferation of very adaptable intelligent life forms against which the Technocrats could not compete. Therefore, they send a Technocrat to every planet showing signs of carbon activity in order to corrupt its DNA sequences and terminate all carbon-based life forms. A self-destruct mechanism is programmed to quickly lead all living species to extinction.

A Technocrat [ZZ‑999] is dispatched to Earth, but once it reaches the Solar System, for unknown reasons, it malfunctions and crash-lands on the planet.

Seriously damaged after the crash, the Technocrat is unable to complete its mission, and carbon‑based life thrives on Earth. Several hundred million years pass, while the Technocrat repairs itself. Only partially functional, it repeatedly tries to wipe out life on Earth through what modern scientists refer to as Extinction-Level Events, but fails each time. After each attempt, drained of most of its energy, the Technocrat goes back to a dormant state in an attempt to restore its functions. The last ELE backfired on the Technocrat, because the elimination of the dinosaurs led directly to the rapid evolution of mammals, eventually leading to humans and intelligent life on Earth. 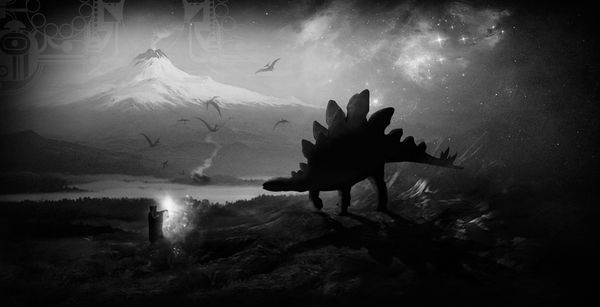 TWILIGHT OF THE GODS

Humans become the first and only intelligent life form on the planet. The Technocrat, having failed to eliminate life with external means, decides to destroy humanity from within. He manipulates the human genetic code to embed the need for organized religion in the human psyche. Religious systems become increasingly dogmatic and intolerant as the Technocrat modifies and introduces new beliefs and divinities to accelerate the process of self-destruction. Animism and shamanism are quickly considered too benevolent and disorganized and are replaced by complex polytheistic systems. Finally, the Technocrat introduces monotheism in three successive waves. These new systems, which worship the same single God in different and conflicting ways, become rigid and dogmatic, with an absolutistic sense of morality that inaugurates a 3000-year era of constant religious fighting, first between the old and the new religions, then between the different monotheistic faiths. 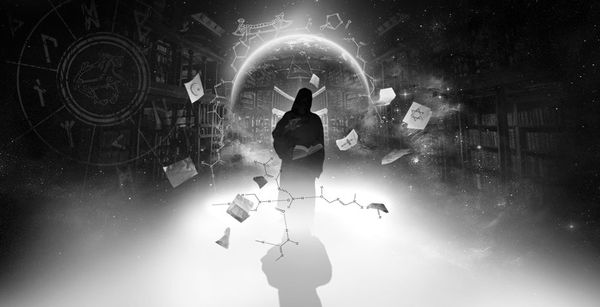 SPACE: Earth
TIME: from the beginning of Christianity (30 A.D.) to the present day

As dogmatic monotheistic religions become increasingly influential, persecutions and intolerance reach unprecedented levels. The Roman Empire, well aware of the threat of expanding Christianity to its stability, initiates a wave of persecutions that lasts for 300 years. Eventually, the Empire loses this religious war and in 313 AD adopts the Christian faith as the official imperial religion. The Dark Ages begin with an endless series of mindless persecutions, crusades and wars against anyone who dares challenge the authority and the supreme doctrine of the Catholic Church. For over 1000 years heathens, heretics of all sorts (Arians, Gnostics, Cathars, etc.), Muslims, Templar Knights, and Protestants all become victims to the fanaticism of the Holy Inquisition, and in turn cause great pain and devastation throughout the ancient world.

In the modern age, the situation has not changed very much. Religious intolerance and fanaticism are still thriving, but they have also been partially replaced by more contemporary and secular concerns. Race, skin color, sex and physical appearance have all become more subtle ways of exercising prejudice, bigotry and discrimination.

Meanwhile, throughout all this sorrow, mysterious beings from outer space keep observing and visiting Earth for unknown purposes. Afraid of the reaction of humans to their presence, these aliens await the right moment to manifest themselves to humanity. 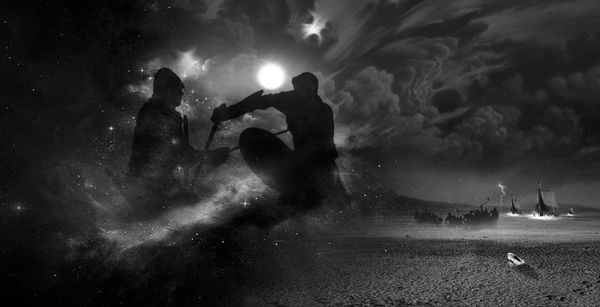 SPACE: The Holy Land
TIME: From the First Crusade (1095 A.D.) to the present day

Since the origins of monotheism, the Holy Land has been a real obsession for Jews, Christians and Arabs, who have used it as an excuse to accomplish the most unspeakable and inhuman acts of war, torture and persecution. The first wars of religion begin after God orders Abraham to leave the city of Ur and conquer the land of Canaan (possibly from the 3rd millennium BC). These wars are first between monotheistic and polytheistic civilizations, but with the emergence of Christianity and Islam, the monotheistic faiths eventually turn on each other to gain complete control of the Holy Land. The climax of this struggle occurs during the Middle Ages, with the onset of the Crusades (1095‑1291), a virulent and clumsy series of wars among Christians, Muslims and Jews for the control of the Holy Land.

Although the historical context is very different today, the situation of the Holy Land remains unchanged. The Medieval Crusades between Christians and Arabs have become a land war between Arabs and Jews, but the methods and the consequences are just as barbaric as they were 1000 years ago. 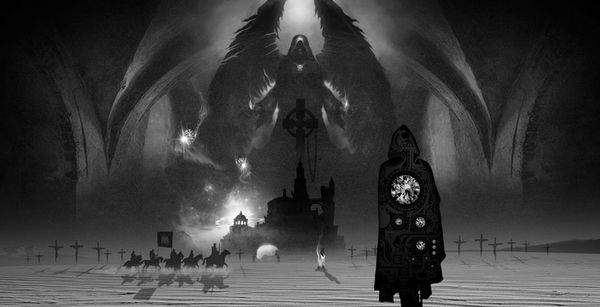 THE GEM OF LOVE

The effects of the genetic ticking bomb that the Technocrat has planted in humanity’s DNA begin to accumulate with increasingly catastrophic consequences for the planet and for humans. Disasters of all kinds are increasing in frequency and intensity. Dogmatic religion continues to be a major source of human suffering. Politicians become increasingly corrupted, ideological and intolerant in their speeches and actions, no matter what side of the political spectrum they belong to. In the name of peace, freedom, democracy and God, many injustices and atrocities are committed by leaders that are increasingly disconnected from the needs of the people. Individuals’ rights matter less and less in a world dominated by corporate financial interests and schemes. Natural events also begin to spiral out of control. Global warming, deforestations, new mysterious diseases are all signs of the Technocrat’s interference in what has been called by several scientists the Holocene ELE, a modern‑day mass extinction, the first caused directly by Man’s actions.

Revolution is brooding as the masses of the world, tired of their leaders empty words, demand radical change. 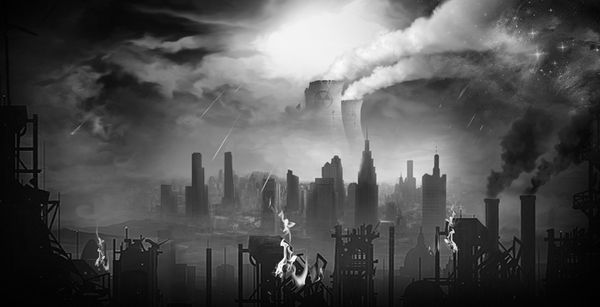 THE SECRET OF DNA

Project DNA was created by the US Department of Energy in 1984 as a secret and classified branch of the Human Genome Project. Its goal is not only to decode the structure of human DNA, but more specifically to understand what makes humans different from animals. Originally, this involved the study of typically human traits such as intelligence, language, culture and art, but it progressively extended to darker fields related to humans’ ability to generate suffering, chaos and destruction for reasons completely unrelated to our survival. The main objective of the project has now become the study of the role of genetics in the universal human need to develop self-destructive systems.

A major breakthrough is finally reached, with catastrophic consequences: the researchers discover inexplicable anomalies in human DNA as well as in every other life form on Earth. However, the anomalies seem to be much more extreme in humans. It quickly becomes clear that these anomalies are directly responsible for a number of human problems, such as cancer and aging, but unlike animals and plants, humans also possess an elusive “God gene”, which is directly involved with the development of fanatical tendencies that result in the creation of large, complex and intolerant religious systems. In another even more dramatic discovery, the researchers at Project DNA realize that these anomalies have been artificially induced in our genetic code, but they are unable to establish how, why and by whom. Since the cause remains unknown, a “cure” remains unreachable.

Project DNA forms a partnership with a team of archeologists, historians and theological experts. They send field teams throughout the world, particularly focusing on areas known for their importance in ancient religions such as the Pyramids, Easter Island, Angkor Wat, Jerusalem and many more. The quest goes on for about two months without any breakthroughs, even if a multitude of clues are collected and analyzed.

Finally, deep under Jerusalem, a team of researchers led by Dr. Jack Heisenberg finds a long forgotten shrine. It appears to have been built by the Templar Knights during the Crusades in honor of the enigmatic Templar god known as Baphomet. The team removes the large stone that covers the shrine and they are immediately bathed in a deep purple ultraviolet light. A thick mist slowly oozes out of the hole they have uncovered. They crawl through the hole, and after a long descent they reach an enormous cave, several miles wide, glowing with the same eerie light and filled with the mysterious mist. In the middle of the cave, the researchers discover a gigantic sphere, translucent and glowing from within with a malevolent ultraviolet light. Strange symbols cover its surface, including a star, a sun and a moon. The sphere is cracked and unexplainable alien machines lie scattered around the floor as well as inside the object. They have discovered the secret base of the damaged Technocrat, who has secretly worked to manipulate the history of our world since the dawn of time. They set up camp and spend long weeks collecting as much information as they can. They discover that the sphere is just a vehicle, but that the occupant is gone. The Technocrat has escaped or has been taken away by someone. 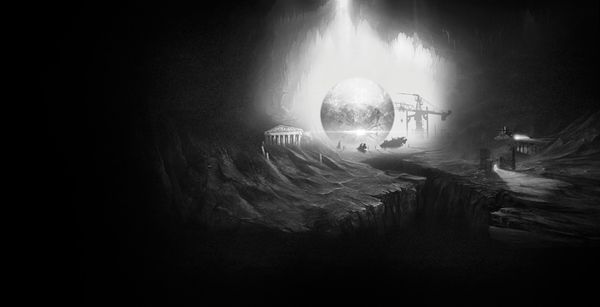